The French poet Stéphane Mallarmé is probably best known for ‘L’Après midi d’un faune’, a long erotically-charged reverie spoken by a satyr, enraptured by the sight of some nymphs bathing. (Édouard Manet’s illustrations for this poem provide some of the images used on this site.) But Mallarmé was also intrigued and inspired by the challenge of writing ‘occasional’ poetry – verses intended to celebrate a specific event or person, or which dedicate an object or gift. Amongst his occasional poetry are 89 quatrains, known as the ‘Récreations postales’ – poems, such as this one, which act as

A plain prose rendering of this poem might read:

At 23 Rue Ballu. I express, as soon as June comes to Monsieur Degas, satisfaction that he rhymes with the flower of the syringas.

From which you can see that it starts with the house number and street where the painter Edgar Degas lived in the late 1880s. (The two men had known each other since 1876.) In her account of Mallarmé’s friendships, Rosemary Lloyd offers a rhymed translation:

Lloyd uses ‘boon’ to translate ‘satisfaction’ in Mallarmé’s original, but I don’t think she did this just for the sake of a rhyme. Describing the poem, Lloyd suggests that Mallarmé’s reference to the rhyming of ‘Degas’ with the woodland lilac, Syringa is intended as a friendly allusion to Degas’ own efforts at writing poetry.** In other words, the ‘occasional’ quality of this poem is not simply the fact that it functions as an address: Mallarmé builds subtle compliments and hints about his relationship with the addressee into its substance. The quatrain is about rhyme and the rhyming of Degas. In Lloyd’s version, the rhyme of ‘boon’ and ‘June’ becomes part of the poem’s gift (boon) to the painter. 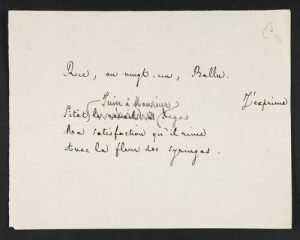 Philip Terry achieves a similar effect in his recent version of the same quatrain within ‘Mallarmé the Postman’, a creative response to these poems in the online journal onedit:

Arrives, I express to M. Degas

My satisfaction that he rhymes

With the flower of the syringas.

Terry keeps ‘rhymes’ as an end-rhyming word from the original, confirming the reflexive quality of the poem (it rhymes about rhyme). But the line break ‘he rhymes / with’ opens up a nice ambiguity: it’s not just Degas’ surname that rhymes, but the person (and the friend) rhymes too, in a different sense.

Terry and Lloyd respond imaginatively in their translations to the subtle energies that flicker through Mallarmé’s poem. But they also demonstrate the truism that no translation is definitive. There are always different solutions. Special Collections at Glasgow University Library is lucky to hold a handwritten copy of Mallarmé’s postal quatrains. And we will be using these in the Spring as a translation case study for this project. This will offer the readers of this blog a chance to propose their own versions of these poems – in any language you see fit. So keep an eye on this space for further announcements.

**In any discussion of Mallarmé’s (sometimes rocky) friendship with Degas, it is compulsory to cite Valéry’s famous account of his retort, when the painter complained that he had ‘too many’ ideas for writing poems:  ‘It’s not with ideas that one makes poetry, Degas, it’s with words’ (Quoted in Lloyd, p. 147).