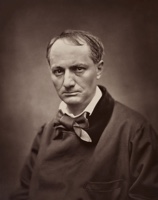 Why were the poets of the nineteenth century so fascinated with the Greek poetess, Sappho? Why did they so eagerly turn her into an image of decadence? Over two blogposts I shall try to find some answers to these questions by looking at poems by Charles Baudelaire and Algernon Charles Swinburne which translate and imitate works by Sappho.

Consider ‘Lesbos’ by Baudelaire, a poem which the censors forced him to exclude from the first edition of his collection, Les Fleurs du Mal (1857). It recounts the myth of ‘virile Sappho, the lover and the poet’ (‘mâle Sapho, l’amante et le poète’ l. 56), and her home on the island of Lesbos. The poem begins:

Laden with innuendo, these lines hint strongly that it is the transgressive sexuality of Sappho and her followers that fascinates the poet.

But Baudelaire’s attitude towards same-sex love is also complicated in the poem. He celebrates Sappho as a god-like figure‘fairer than Aphrodite’ (‘Plus belle que Vénus’ l. 57). Yet he describes the sensual pleasures of her followers as ‘’sterile pleasure’ (‘stérile volupté’ l.18). This confirms that it is their same-sex love that fascinates him, but also introduces a note of qualification.

This culminates in the assertion that Sappho has betrayed the world that she built on the island: 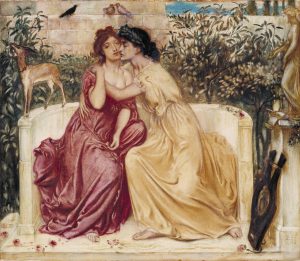 Baudelaire clearly diverges from received versions of Sappho’s story here. According to myth, Sappho killed herself out of misery over her unrequited love for the boatman Phaon. But Baudelaire describes her death as blasphemy (‘son blasphème’), as if a heterosexual attachment proved her unworthy of her title and place on the isle of Lesbos. The hint of rape here (‘un brutal’) also hints at the worst kind of victim blaming.

In The Sappho History,Margaret Reynolds suggests that Baudelaire and Swinburne ‘break up Sappho, dissect her, fragment her and insert themselves into her spaces’ (p. 148).** And ‘Lesbos’ would seem to confirm this. As Reynolds points out, Baudelaire translates Sappho ‘across language, time and gender’ (p. 152). In doing so, he fragments her further and puts together the pieces to shape his own poetic voice. She is, as Reynolds observes, both his muse and his victim (p. 153). In the process of translating Sappho from the past into the present, Baudelaire remakes her in the spirit of decadence – but at what cost?

Stina J. Nölken is a postgraduate student in Comparative Literature within the School of Modern Languages at the University of Glasgow. She is currently completing a Master’s dissertation on self-translation and bilingual identity in Klaus Mann’s The Turning Point and Der Wendepunkt.