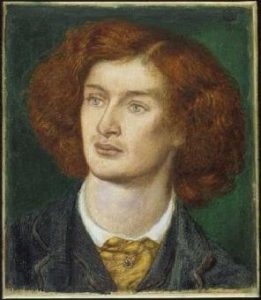 Who speaks in a translation? What happens to a translator’s own identity or voice when translating? And what about the voice of the writer being translated? In my previous post, I showed how Baudelaire’s imagined re-creation of Sappho on the island of Lesbos transformed into an identification with the Greek poetess. In this post, I examine the work of the English poet, Algernon Charles Swinburne, self-appointed successor to Baudelaire.

Published in Swinburne’s first collection, Poems and Ballads: First Series (1866), ‘Sapphics’ offers his version of ‘Ode to Aphrodite’. This is one of the few poems by Sappho to have survived in its entirety from antiquity. In it, Sappho calls to Aphrodite, begging her to free her from grief over the unrequited love of a girl and to ‘fulfil everything that / my heart desires to be fulfilled: you, yes you, / will be my ally’ (ll. 26-28).*

But Swinburne takes considerable liberties when translating: in his version, Aphrodite calls to Sappho, asking her to return to Lesbos. He also places himself at the centre of the poem, which opens:

Then to me so lying awake a vision

Came without sleep over the seas and touched me,

Softly touched mine eyelids and lips; and I too,

These lines use the first person to write Swinburne into his translation, such that Yopie Prins calls his poem the ‘self-mirroring version’ of Sappho’s original (p. 142).** He not only reverses the original poem, but Sappho herself becomes an instrument for Swinburne the poet. 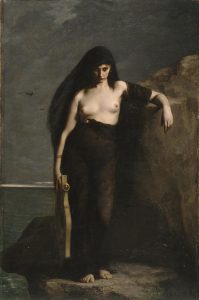 Importantly, Swinburne’s liberties in ‘Sapphics’ contravene the conventions of his Classical education in England. As well the departures from his source material noted, Swinburne adopts the feminine lesbian voice and restores homoerotic elements to the poem that conventional translators had omitted from traditional English translations of Sappho. According to Richard Sieburth, Swinburne defended the ‘deviant’ nature of his poetry, arguing that ‘since much obscenity imputed to his verse was merely an imitation or paraphrase of the ancients, to condemn his poetry was to implicate as indecent the classical heritage upon which the Victorian ideal of culture was founded’ (p. 350).*** Thus, Swinburne’s admiration for Sappho as a poet can further be seen as a strategic choice that enabled him to explore publically proscribed themes without calling upon the wrath of the censor. Whilst he broke the rules of translation, he also used translation as a cover.

My readings of Baudelaire and Swinburne in these blogposts reveal an important ambivalence. For they were among the first poets to acknowledge Sappho as a lesbian and to explore artistic construction of lesbianism in art and poetry. This set them apart from societal norms and opened their work to censure. Both poets were fascinated with her and used her fragmented poetry and identity as inspiration for their own creative practice. But it is hard not to feel that they both take advantage of Sappho too. Attracted to the fragmentary nature of her surviving works, they tore her into even more pieces by rewriting her myth, voice and self.

* Translated by Josephine Balmer and quoted in Margaret Reynolds, The Sappho History (Palgrave, 2003)

Stina J. Nölken is a postgraduate student in Comparative Literature within the School of Modern Languages at the University of Glasgow. She is currently completing a Master’s dissertation on self-translation and bilingual identity in Klaus Mann’s The Turning Point and Der Wendepunkt.