On the 13th December 2019, scholars of decadent literature from across Europe and the US gathered at the University of Glasgow for the Decadence and Translation Network’s highly anticipated ‘Translating Decadence’ workshop. This event followed on from the success of other previous Decadence and Translation events in Oxford, London and Strasbourg and focused on the practical, ethical and semantic challenges of translating decadent works. Participants explored how the recent revival in decadent translations occupies a significant place in an increasingly globalized decadent critical field. 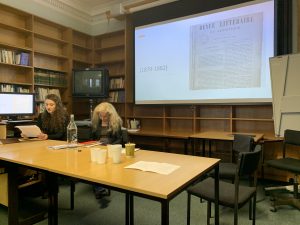 After a warm welcome from Dr Matthew Creasy (University of Glasgow), the event opened with a talk by Dr Lara Gochin Raffaelli (Milpark) ‘D’Annunzio in Translation’, which explored how English translations of Gabriele D’Annunzio’s work confronted British censorship. Raffaelli focussed particularly upon D’Annunzio’s Il Piacere, which she herself translated in 2013. Caroline Crépiat and Professor Bénédicte Coste (University of Burgundy) then demonstrated how they are marking accessible translations of work by Anglophone writers such as Ernest Dowson in nineteenth-century French periodicals. Their innovative databases and academic blogs Décabase and Mélliflux Decadent are bringing these texts to a wider audience in digital form. 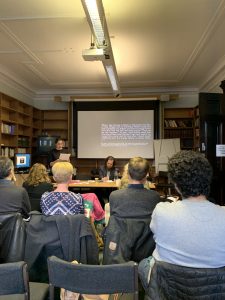 The first panel of the day moved on to discuss the nature and influence of decadence outside of Europe. Dr Katharina Herold’s (University of Oxford) ‘De-Orientalising pomegranates: Wilde in Arabic translations’ provided intriguing practical examples of how Oscar Wilde’s work has been phonetically translated into Arabic, and of how Orientalist themes within Wilde’s Salome were adapted by a Middle-Eastern readership. Adam Wilson (University of Glasgow) discussed how Russian decadents viewed the artistic and literary subversion of decadence as a conduit to societal change and renewal, and Ekaterina Shatalova’s (University of Oxford) ‘Russian Translations of Salome’ further explored how the exoticism of Wilde’s Salome was interpreted on the Russian fin de siècle stage.

After a delicious lunch, Colton Valentine’s (Yale) presentation ‘En Route to the Victorians: The Translation Histories of Two Novels by Joris-Karl Huysmans’, analysed the publication history of Huysmans’s novels, En Route and La Cathédrale, and their ensuing popularity. I then presented my own paper, ‘Princesses of Glass and Silence: Renée Vivien’s (Re)translation of the Fairy Tale’ which explored the fairy tale adaptations of the fin de siècle poet, Renée Vivien, as examples of ‘translation as transformation’ that enabled fairy tales to become decadent texts. Lastly, Anne Rainey’s presentation, ‘Carson as Bricoleur’ compared traditional translations of Rimbaud’s poems to the translations by the Irish poet Ciaran Carson, who infused his innovative translations with contemporary language. 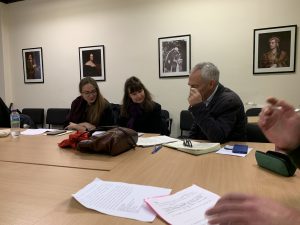 Puzzling over J.K. Huysmans in the Translation Workshop

After this varied range of talks concluded, delegates experienced the benefits and challenges of translation firsthand, by translating texts by Huysmans, Rachilde and D’Annunzio in workshops led by Brendan King, Jennifer Higgins, and Elisa Segnini (University of Glasgow). The day ended with the launch of ‘Récréations postales’-a digital exhibition of Mallarmé’s work- within the University of Glasgow’s Special Collections. A lively performance of ‘Mallarmé and the Postman’ by Professor Philip Terry (University of Essex) proved to be a unique and memorable end to a thought provoking and highly enjoyable day. 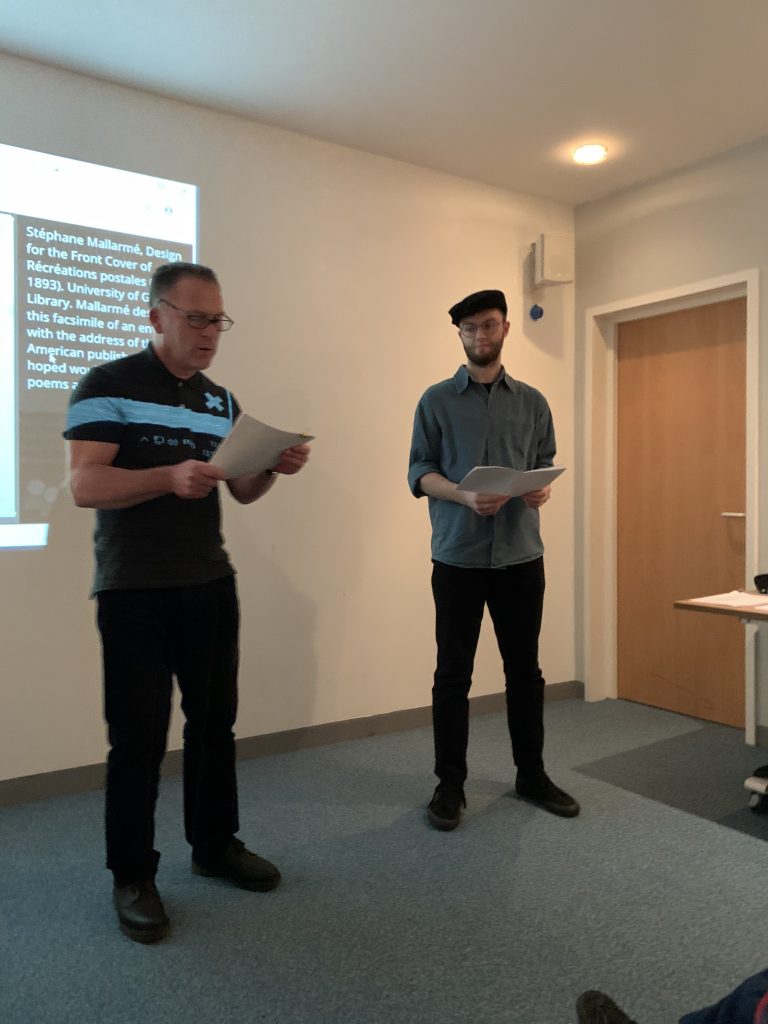 Philip Terry and Callum McCluskey perform ‘Mallarmé and the Postman’